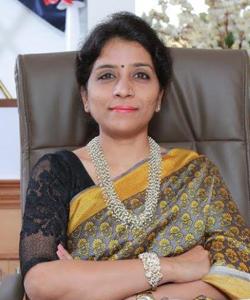 Past President, Institute of Company Secretaries of India

Dr. (h.c.) CS Mamta Binani is the National Immediate Past President of the Institute of Company Secretaries of India (ICSI) for the year 2016 and she relinquished the office of President on 19th January, 2017. She is the second lady President of ICSI in the illustrious history of the Institute of 49 years.
She is a commerce graduate, a Fellow Member of the Institute of Company Secretaries of India and is a law graduate. She has been a meritorious student throughout her education career. She ranked All India 1st in the Intermediate Examinations of The Institute of Company Secretaries of India, amongst all the Lady Candidates in India and had ranked 14th on an All India basis. She has received various medals, certificates and awards including the D.L. Mazumdar's Silver Medal and Mauji Ram Memorial Award. She is a regular and acclaimed speaker in the professional forums on subjects of contemporary and academic interest including inter-personal & communication skills.

She has been conferred with the “Bharat Nirman Awards” in the year 2010 for “Excellence in Professional Services” and is the first Company Secretary to have received this prestigious award and also the KKMERS award for excellence in profession. She also received the “Tejaswini Award” in the year 2010. She was conferred with the “Hello Kolkata” award for exemplary work in social sector. “Wah Zindagi” has featured a telefilm on her journey which is widely viewed in YouTube.

She has been conferred with the “Doctor of Excellence” Certificate in Honoris Causa in recognition for excellence in the field of Management, for outstanding performance and excellent contribution and undisputed commitment through her sustainable work which benefits country and society at large. She is an honorary member of different industry bodies and associations. She is an executive committee member of INSOL India. She is also a member of International Women’s Insolvency & Restructuring Confederation. She has been bestowed with “Women Excellence Award” by World Peace & Diplomacy Organization for Women Empowerment & SDG’s (Sustainable Development and Goals), through peace and diplomacy.
By profession, she has been practising as a Company Secretary since 1997. She has been playing predominant role in corporate consultancy and has been working as an insolvency professional. She is the first insolvency professional in the country to be registered with the Insolvency & Bankruptcy Board of India.
She has travelled many countries and had represented ICSI on various contemporary corporate issues.