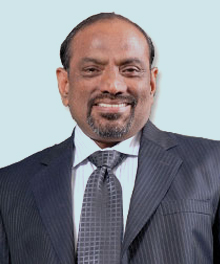 Prior to Edelweiss, he had an aggregate service of over 35 years as a banker. Starting his career with the Reserve Bank of India in 1969, he moved to IDBI, India’s principal Development Financial Institution in 1975. Pursuing a very successful career in IDBI, he had grown to the position of Executive Director. He was appointed as the Executive Trustee of Stressed Assets Stabilization Fund, a Rs. 9000 Crore Fund created by Government of India to take over the stressed loans of IDBI, prior to its merger with IDBI Bank. He was also associated with the Corporate Debt Restructuring mechanism since inception and he was the Chairman of the Empowered Group of CDR until 2008. He also served on the board of ARCIL, the pioneering Asset Reconstruction Company in the country, as a nominee of IDBI.

During his career with IDBI, as a senior executive in the Project Finance Department he was in-Charge of sectors namely, Oil & Gas, Chemicals and Petrochemicals, Steel and Textiles, besides Road & Ports. He was also associated with the Inter Institutional Group constituted by Government of India and RBI for studying the issues connected with the flow of investment in infrastructure. He represented IDBI in the informal committee constituted by Ministry of Surface Transport (MOST), Government of India for drafting/finalisation of the Model Concession agreement for road projects.

After retirement from IDBI Bank in 2008, he joined the Edelweiss Group to establish the distressed asset business in Edelweiss and as a first step set up Edelweiss Asset Reconstruction Company which has a license from RBI. Today Edelweiss ARC is the largest ARC in the country having acquired NPA of nearly 85,000 cr from the banking system. The Distressed Asset Business of the Group has assets under management (AUM) of Rs 25,000 crore. Presently, Mr. Siby Antony is the Chief Executive Officer and Managing Director at Edelweiss Asset Reconstruction Company Limited.